I am pleased to announce that Murder in Mariposa Beach received a July 2021 Firebird Book Award in the Mystery Category. 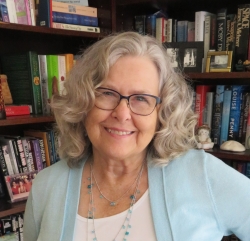 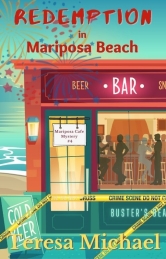 Redemption in Mariposa Beach - Book 4
Welcome back to Mariposa Beach for the fourth book in the Mariposa Café Mystery Series, where it’s all about fun Florida mysteries featuring fearless, female sleuths.

It appears that dead bodies continue to be following Libby Marshall all through the otherwise quiet little beach town of Mariposa Beach, Florida. And this 4th of July is no exception. The problem is that the recently deceased was someone who had very important information for Libby regarding the man who had kidnapped her not so long ago – Max Holden.

The question really is who knows what about Max … and that includes how much Libby’s boyfriend, Detective Jack Seiler, knows too. And what does Max’s status have to do with the trafficking ring that seems to be attempting to get back to business as usual? 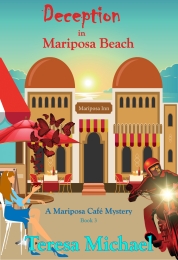 Welcome back to Mariposa Beach for the third book in the Mariposa Café Mystery Series, where it’s all about fun Florida mysteries featuring fearless, female sleuths.

There’s a new, big-time New York City director in town–Jerry Mann–but whether or not he’ll live to see opening night of the play he’s there to direct isn’t a guarantee. With several new crimes to solve that appear to have followed Mr. Mann to Mariposa Beach, Libby Marshall, a former prosecutor, and her super-hot detective boyfriend, Jack Seiler, will need all the help they can get from the quirky crew and patrons of the Mariposa Café.

But, this time, it’s more than a little personal for Libby. Her Aunt Julia appears to have a mysterious past with Jerry Mann, and it’s looking like a past that will have a major impact on Libby’s future.