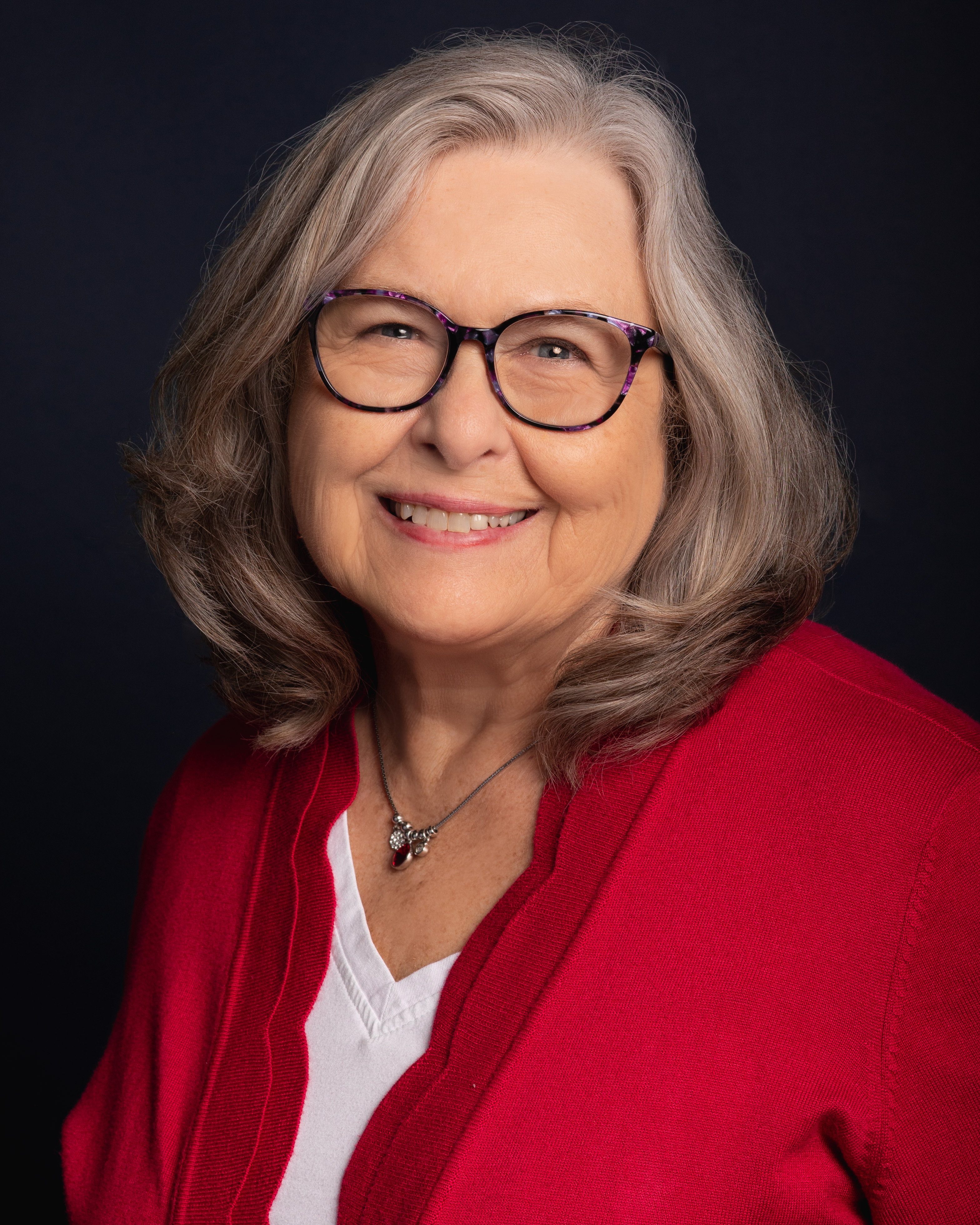 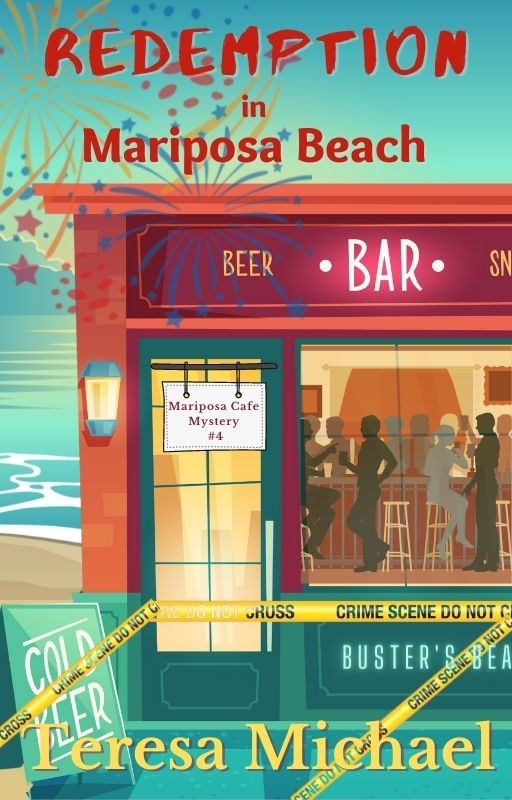 Sep 18, 2022 by Teresa Michael, in Newsletters
On Saturday, August 13, we celebrated the release of Redemption in Mariposa Beach at the Club room of the Broadway Promenade. My goal was to celebrate my beta readers, writer’s group, supporters, family, and close friends. One of my oldest and dearest friends, Sue Griffith, hosted the event. My daughter, Becky Brothers, tended the bar. Redemption in Mariposa Beach is available on Amazon in ebook and print.  Here are a few pictures from the book launch party. 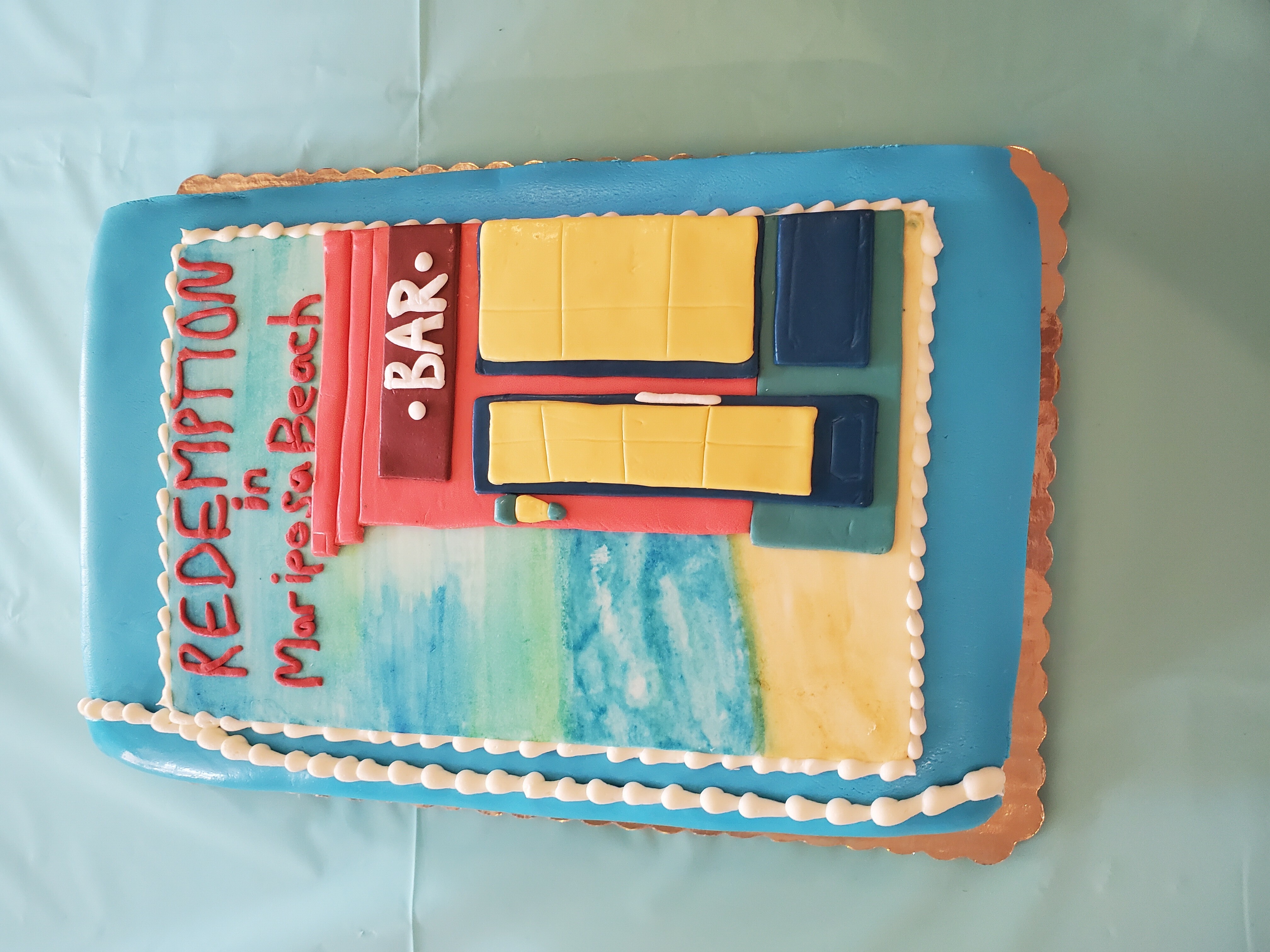 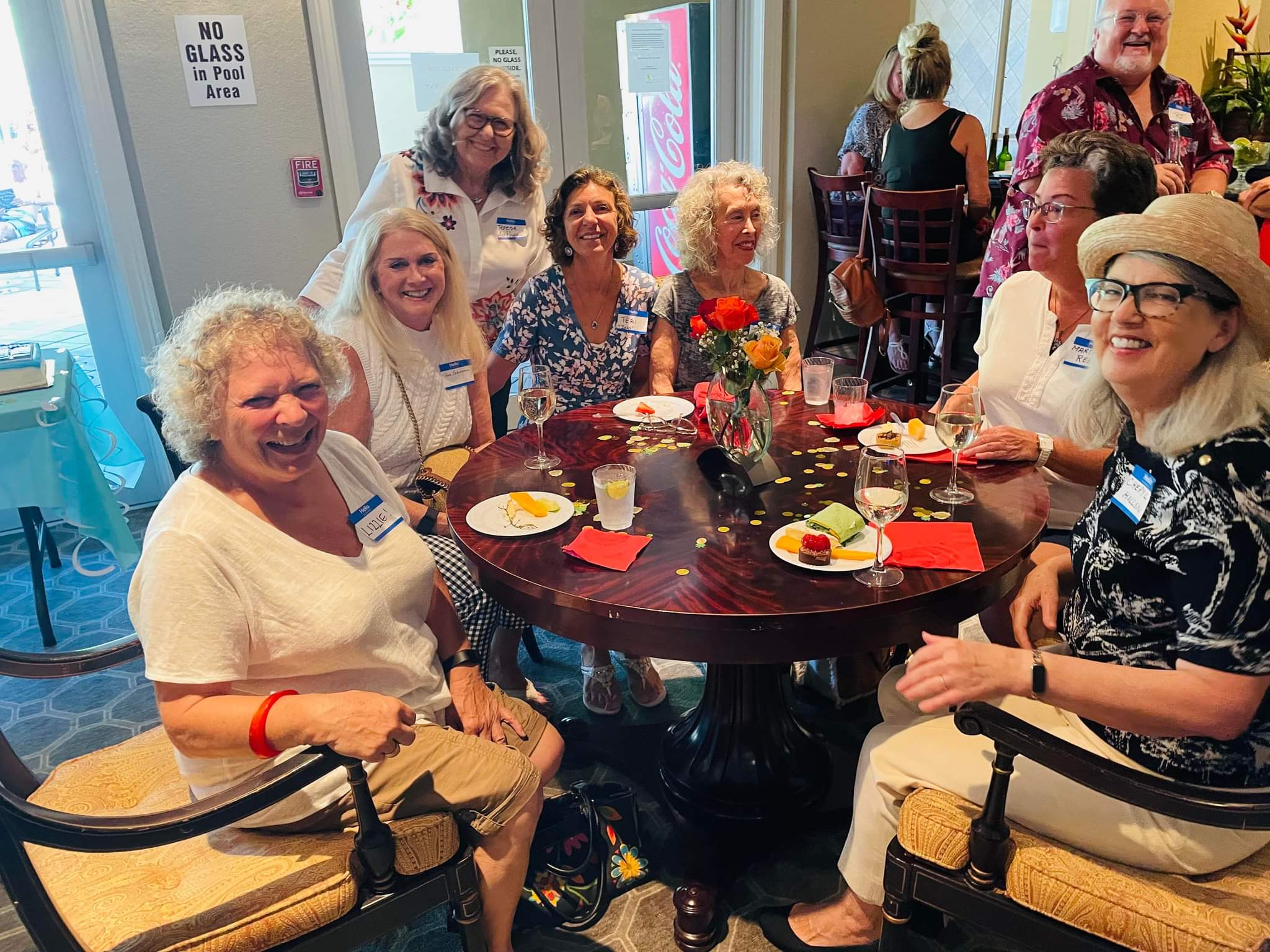 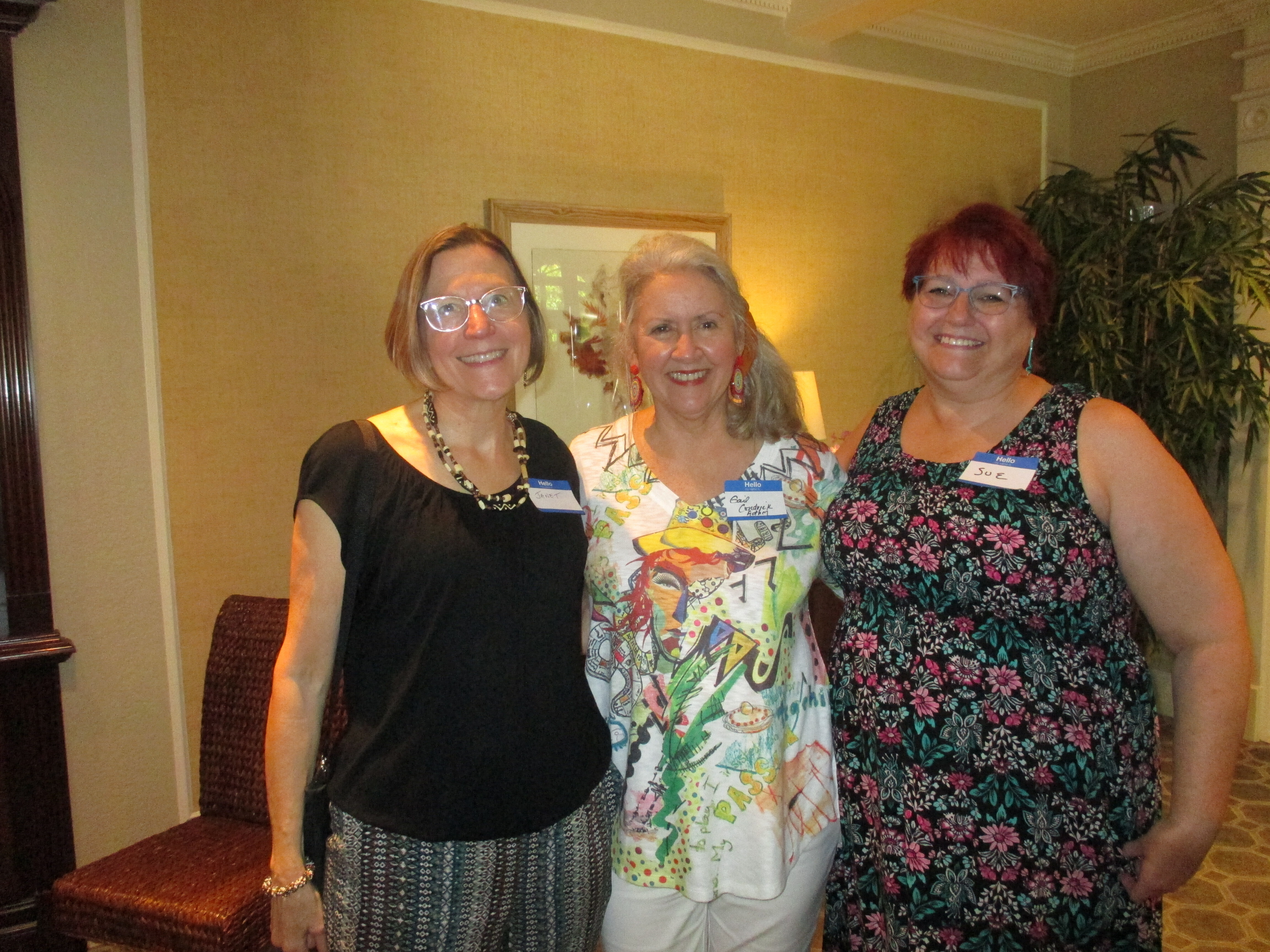 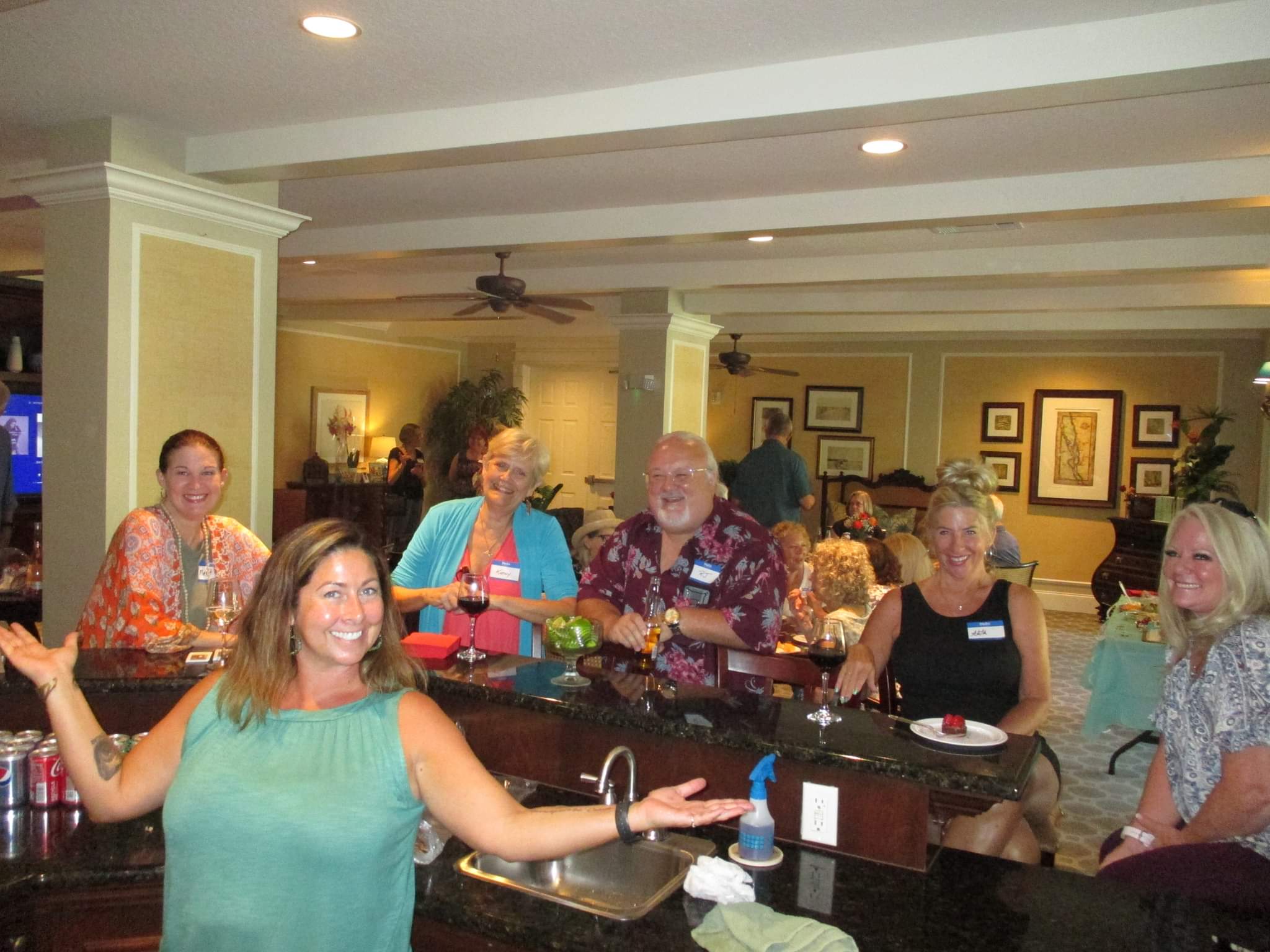 I attended Marisa Mangani’s book launch of Mise en Place – Memoir of a Girl Chef. Marisa is a member of my Sarasota Writer’s Group, Inkylinks. Her memoir takes the reader on a ride from her birthplace in Hawaii to kitchens and tiki huts from Oregon to New Orleans, Vancouver, Australia, and finally, Florida. Her descriptions are so vivid that the reader can almost smell the food. “Disadvantages be damned, I would be a chef someday, and if I had to run into the side of a house to do it, so be it” Marisa Mangani, Mise en Place. It’s available in print and ebooks on Amazon and other online booksellers. Check it out. I highly recommend this book. 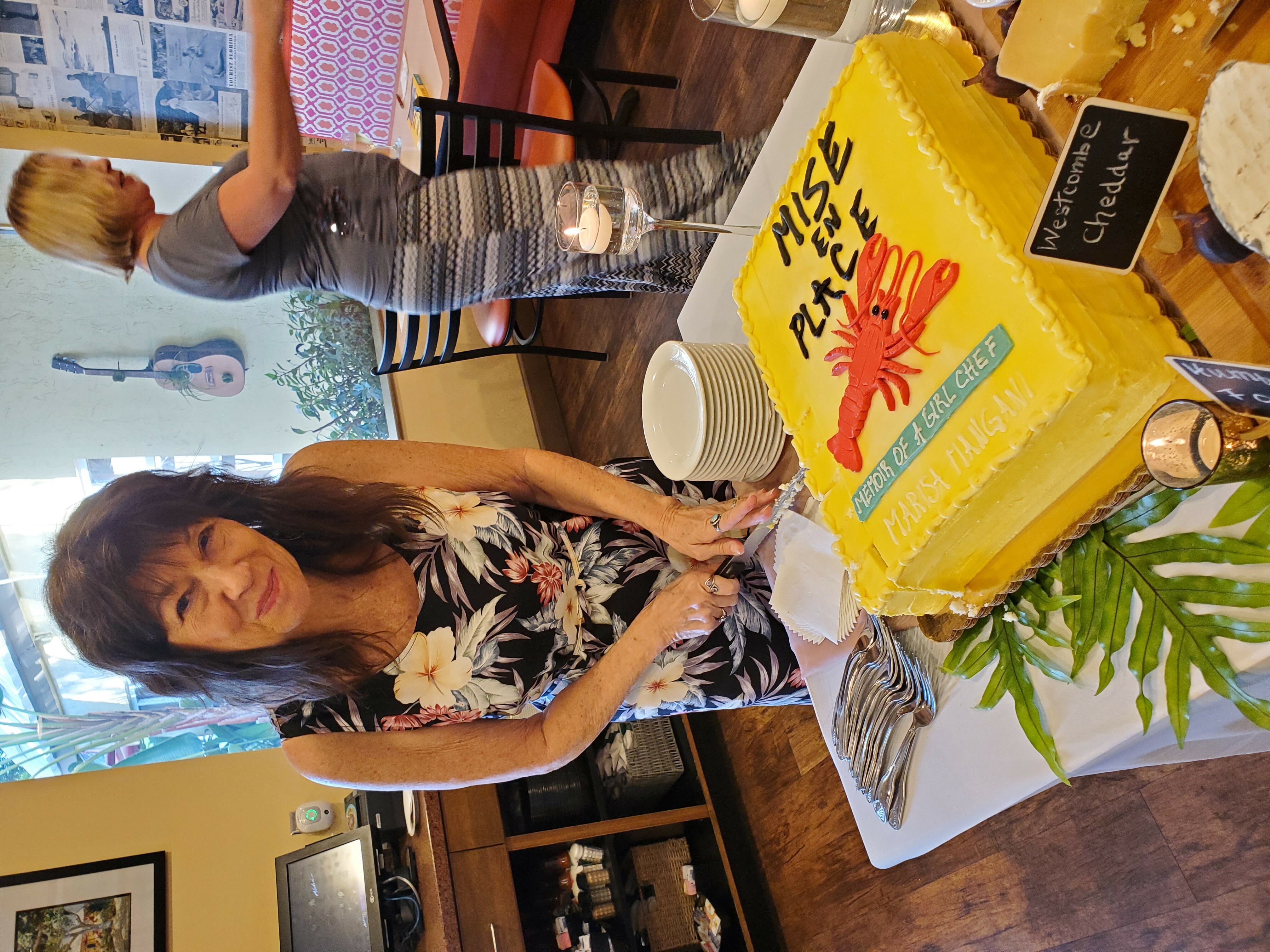 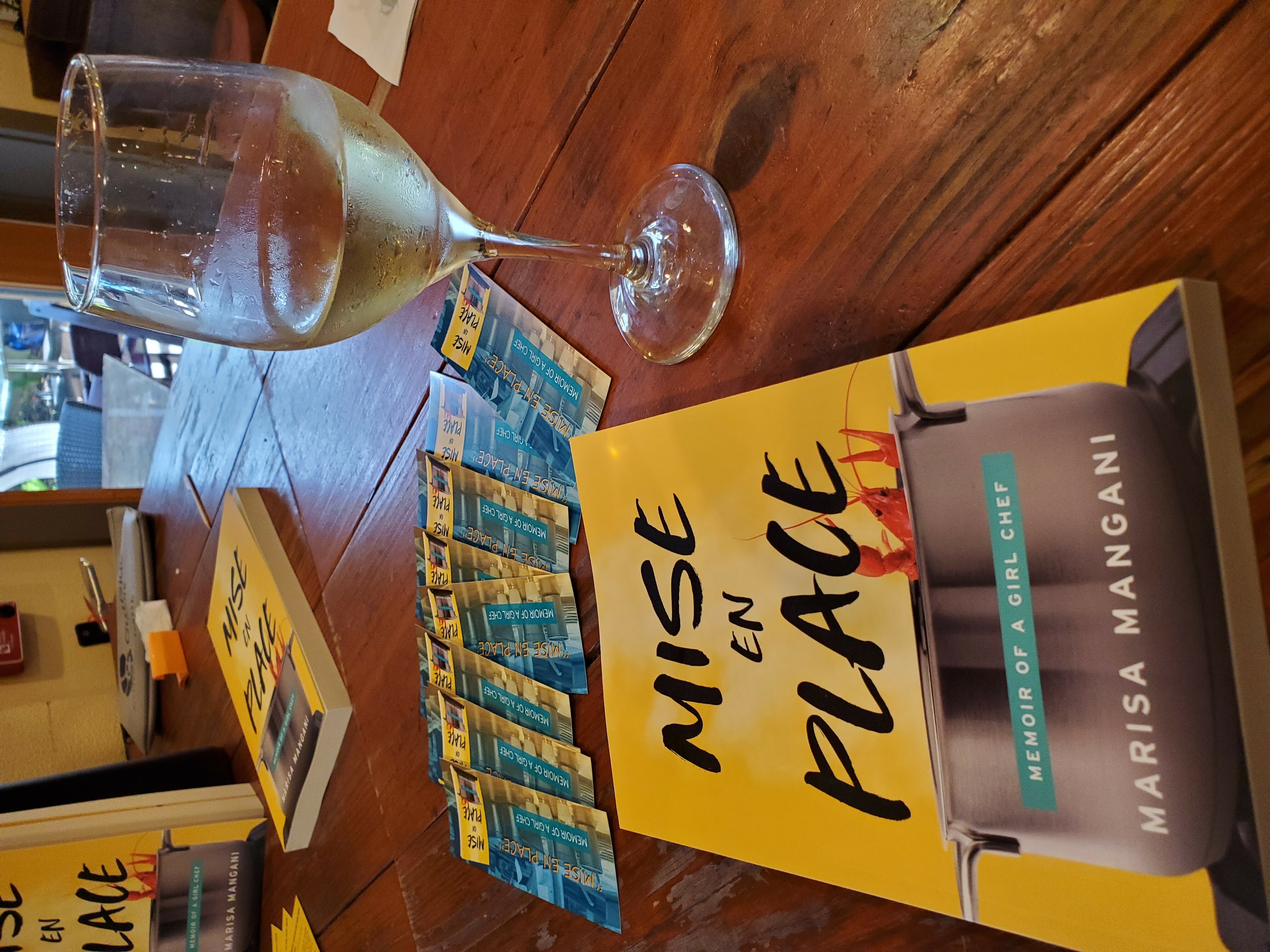 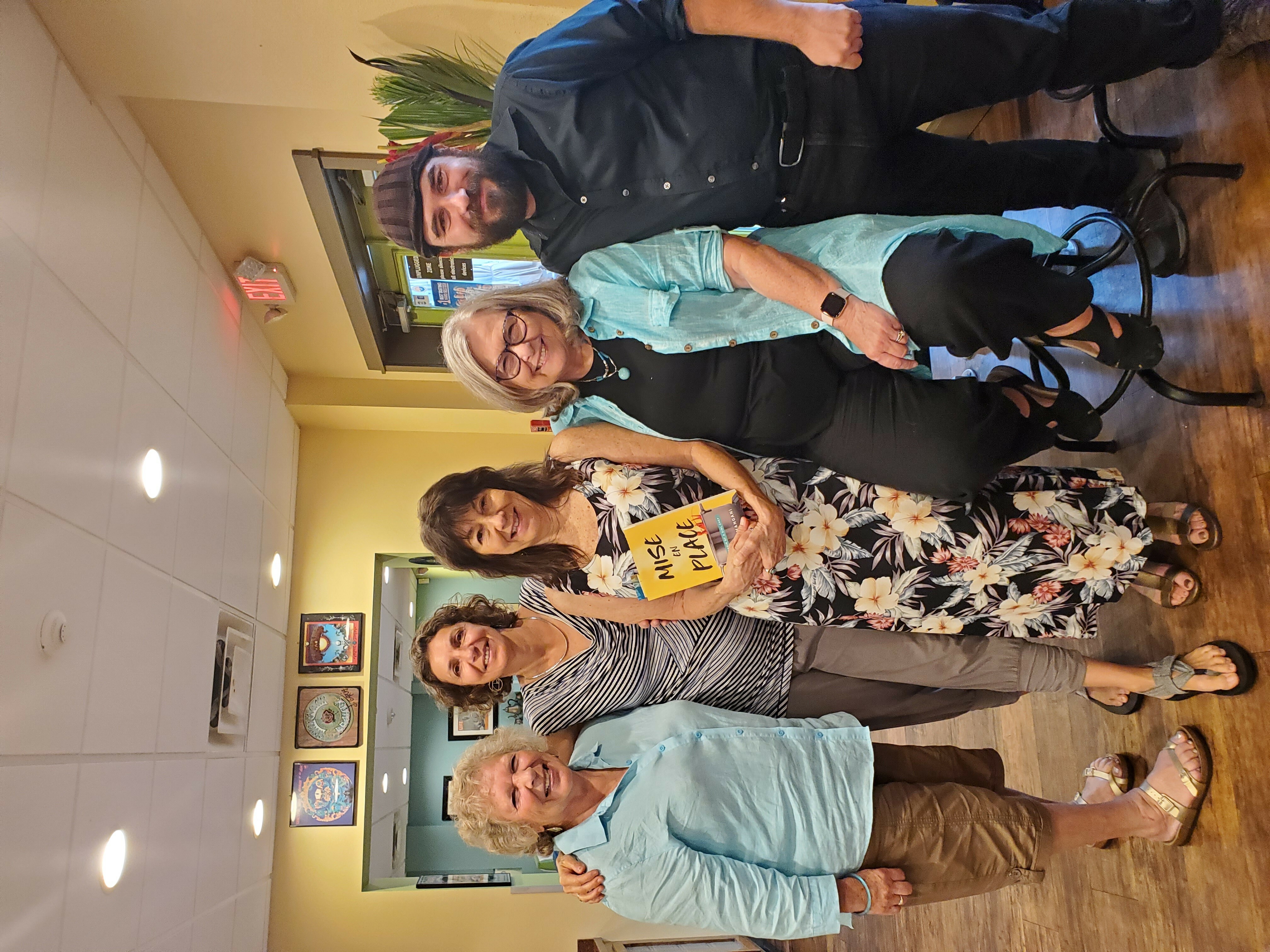 WIP (Work in Progress)
Murder in the Terrace Room --- 34,428 words.
I’m enjoying writing this story. I’m about halfway. I’ve gotten good responses and ideas from my writing and MWA critique groups. Here’s an excerpt. Molly is the proprietor of the B&B and finds the dead writer, Aubrey Rhodes. Detective Tony Shannon has requested a room to interview the guests. Molly suggests the library.

“Will this work?” Molly asked as she glanced around the library where, the night before, Eleanor McKelvey of River Crest Books and Gifts had set up a bookstore and conducted business at the vintage mahogany secretary’s desk. They had stacked boxes of books on the dark blue and mauve Oriental rug while guests sat on the rolled-arm sofa, chatted with their friends and neighbors, and waited patiently for their turn to buy a book and get it signed. Aubrey had even donated an autographed book to Molly’s nearly full yet meticulously arranged wooden bookcases on the opposite wall.
Molly thought about the night before when the air was charged with excitement and the smell of new books delicately accented by the roses in the coffee table’s centerpiece and the felt-tip pen Aubrey had used to sign each book.
Last night seems like a dream, Molly thought as she rubbed her arms against a sudden chill.
“This will do fine,” Tony said, surveying the room.
The doorbell rang, Molly excused herself, and Tony followed her into the entry hall, where she opened the door to a uniformed officer.
He introduced himself to Molly and acknowledged Tony with a nod. “Sorry it took me so long. There was a big wreck out near the interstate. I got away as fast as I could.”
“No worries, Jeff,” Tony said. “Make sure the witnesses don’t leave the dining room or parlor except to go to the bathroom down that hallway.” He pointed toward the kitchen. “And please let me know when the crime scene techs arrive.”
“Yes, sir.” The officer nodded and took up his station by the front door.
“Molly, before I begin the interviews, do you have the list of current guests and their rooms?”
“Yes, I’ll write them down for you.”
Molly returned to the library and removed a sheet of Harrington House stationery from the desk drawer. She wrote the list and handed it to Tony.
Tony read over the list. “What’s that name? Che-ah-son?”
“It’s pronounced ‘Sha-sawn.’ It’s French. They’re from Louisiana.”
“She’s the one who wants to go first because she’s meeting her sister at the beauty parlor. Will you ask her to come in, please?”
Molly chuckled. “No one calls it a beauty parlor anymore. Her sister is getting married at St. Bridget’s tonight.”
“My mother does,” he said. “But first, I have a request. Please forward any photos you or Elise took at the event last night. I know you said that” he scanned the list she’d provided, “Ms. Luttrell posted a lot of social media content, and I’m going to have someone comb all the platforms, but I’d like to see any unedited crowd shots.”
“Elise and I were so busy last night that I didn’t take many photos. I took a couple before the guests arrived and a few during, but that’s it. I’ll send you what I have and ask Elise about hers.”
“Thanks,” he said, handing her his business card. “This is my work e-mail and cell phone number.” Then he pulled out the high-back Windsor desk chair. “Wow, there are lots of drawers in this desk.”
Molly laughed. “There’s supposed to be five secret compartments, but I think I’ve only found four.”
He sat down and glanced at a sepia-toned photograph of a young woman in a 1920s-era fringed dress and feathered headband. His eyes darted up to Molly and back to the photo. He picked up the filigreed frame and took a closer look.
“Molly, who is this? She looks exactly like you.”
She chuckled, “That’s Elnora Harrington, my great-great-aunt. I suppose there’s a small resemblance.”
“Small resemblance? You’re the spitting image.” He shook his head and returned the photo to its place.
“By the way, she’s rumored to be the family ghost.” Molly nodded toward the dining room. “I’ll get Mrs. Chiasson.”

What Else Have I Been Up To?

In July, I attended Sleuthfest in Deerfield Beach, Florida. It was so nice to see people we’ve only seen on zoom over the last two years. I introduced Anne Cleland, author of the Doyle and Acton mystery series—one of my favorite series. I also moderated a panel discussion titled “My secondary characters are Metropolis, Fantasia, and Mayberry.” We had an excellent panel discussion with authors Alyssa Maxwell, Cheryl Hollon, Micki Browning, Neil Plakcy, and Tina de Bellegarde.

I just returned from Bouchercon, the World Mystery Convention, in Minneapolis. I moderated a panel titled “Coast Cozies – Life’s a Beach, and then you die!” Like the Sleuthfest panel, I read at least one book from each author and developed a list of discussion questions. We had a fun discussion. The panel discussions and workshops were great. I also went on a retreat in the northern Minnesota woods with two writer friends. More about that in the next newsletter.

What have you been reading and watching?

We binge-watched all four seasons of Yellowstone on Peacock. I’m ready for season 5, which premieres in November. I also watched The Staircase on Netflix, a thriller with Colin Firth and Toni Collette. In addition to the books I mentioned above, I just finished Where the Sky Begins by Rhys Bowen. Our book club is reading All About Me, My Remarkable Life in Show Business by Mel Brooks, an interesting story behind all the old comedy stars and shows like Sid Cesar, Imogene Coca, and Carl Reiner. I also read Redemption by David Baldacci, it’s an Amos Decker, Memory Man story. Baldacci is one of my favorite authors. What are you reading?


You can always reach me at teresamichaelauthor@gmail.com or through my website at https://teresamichaelwrites.pubsitepro.com or my Facebook Author page here
Please follow me on Goodreads. Teresa Michael (Author of Murder in Mariposa Beach) | Goodreads

And if you have a moment and like my books, please leave a review on Amazon and/or Goodreads. Authors depend on reviews to get the word out about their books. It doesn’t have to be long—just a sentence or two, which is greatly appreciated.

If you’re not a subscriber, you can sign up for this newsletter here